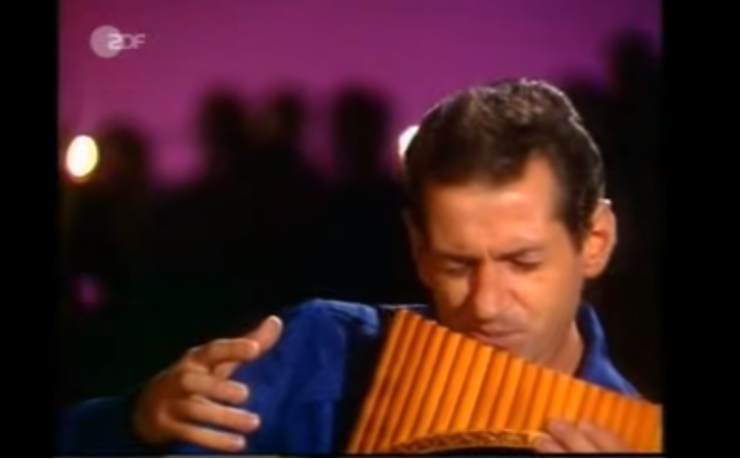 Gheorghe Zamfir is one of the most incredible artist Romania has to offer. He is also named The Master Of The Pan Flute and has a great reputation in the whole wide world.

One of his songs made it to Hollywood, being used as one of the soundtracks for the Kill Bill movies, directed by Quentin Tarantino in 2003. The song „The Lonely Shepherd” will forever be heard through Tarantino’s vision.

The Lonely Shepard is a Romanian song that makes your skin stand up. The beautiful sounds that a pan flute makes will touch your heart and make you want to dream with your eyes open.

Gheorghe Zamfir became more popular in the international press when the musicologist Marcel Cellier approached him. Marcel Celliers was researching extensively Romanian folk music in the 60’s. More so, in 1972, the composer Vladimir Cosma brought Zamfir and his pan flute to other European countries, especially in the West side as a soloist for the original music of the movie Le Grand Blond Avec Une Chaussure Noire.

The creation had a great success, and gave Zamfir an opportunity to be a soloist in more that one soundtrack, being used by composers like Francis Lai, Ennio Morricone and so much more.

Of course, one of the biggest impact that Zamfir had on people was presenting the pan flute and the folk Romanian music to the modern audience.

Gheorghe Zamfir was the conductor of the „Ciocîrlia Orchestra”, a prestigious music group in Romania, who mostly had concerts abroad since 1966 untill 1969.

Then , he left the orchestra and started his own musical group , having his first big concert in Paris in 1970.

He had fis first big break when his music had a special appearance in the BBC religious programme The Light of Experience, using the song Doina de jale, a traditional Romanian song that is used mostly at funerals.

His songs had big breaks in more than one foreign country. He made it to number 9 in South Africa with the song Summer Love in November 1976, in 1983 the song Blue Navajo made it in the top three. Canada loves Gheorghe Zamfir’s music.

More so, his performance can also be heard in the 1984 film Karate Kid, in Ennio Morricone’s Childhood Memories and Cockeye’s Song and many more.