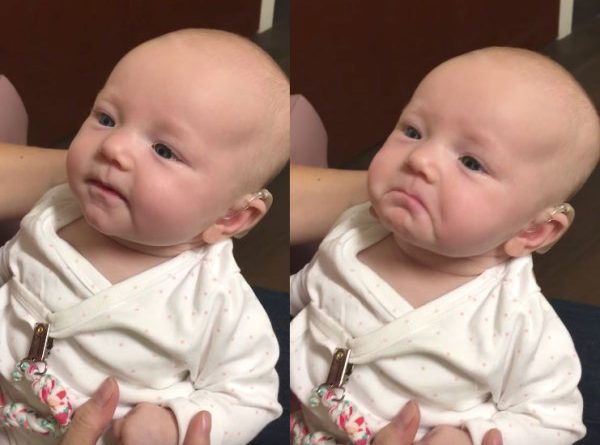 This baby girl got some hearing aids so she could hear. As soon as she heard her mother’s voice for the first time, she broke into tears of joy as her mom carried and told her she loved her.

A baby born without the ability to hear finally heard her mother’s voice for the first time. The emotional moment between mother and child was shared on social media and has quickly captured the hearts of millions of people around the world.

2-month-old Charly Keane was reportedly born with congenital hearing loss and her parents did not know if she would ever hear in her life. “The reason we found out is because Virginia has a great early screening program where, at 24 hours of life, they do a hearing screen on the babies and, she failed,” her mother Christy Keane said, via WNCN.com.

After a pair of hearing aids were donated to the Virginia Beach family, Charly was able to hear her mother’s voice for the first time since she was born in August.

“I know she was feeling what I was feeling in my heart at the same time,” Keane said of her daughter’s emotional reaction to hearing her first sounds.

The family shared the moment on Facebook on October 12 and it has already been shared over 290,000 times and has more than 17 million views. Charly’s family is now exploring the possibility of her using cochlear implants, which are surgically inserted into the ear and carry signals straight to the brain. Charly would reportedly be eligible for the procedure when she turns one.

According to the American Hearing Research Foundation, this type of hearing loss occurs in one out of every 1,000 to 2,000 births. This condition may have given baby Charlotte a very quiet beginning in life, but her mother assures that baby Charlotte, or “Charly” as they call her, is very loved. Keane writes in an Instagram post, “You won’t hear us tell you ‘I love you,’ but I promise you will feel it. With every touch, look, and smile, you will feel our love surrounding you sweet girl. No matter what this journey brings, we will love you through it.”

In a more recent post, we learn that baby Charly does indeed get to hear her mother say those precious three words, as she has been gifted hearing aids to help amplify sounds. Charly’s reaction to hearing her mother say “I love you” is an absolute tearjerker! It comes as no surprise that this special moment has gone viral.

Initially, Keane planned only to share the video with friends and family, but was encouraged to make the post public. She could have never expected the impact this private moment would make on the world.